Here when you need us 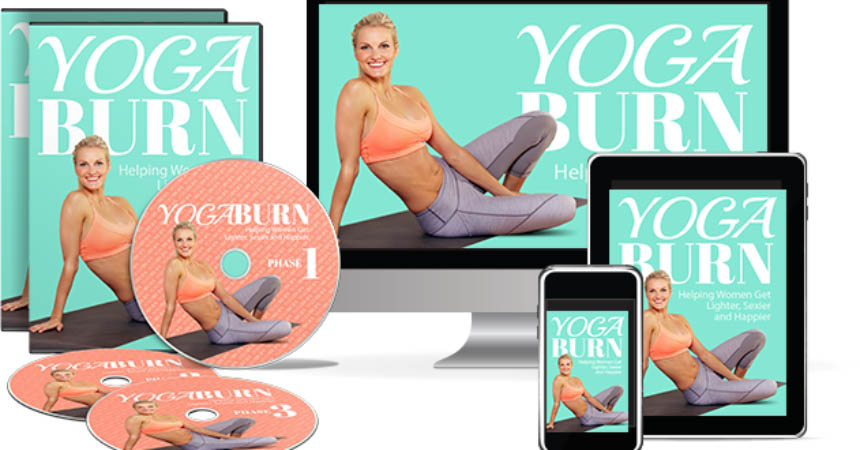 What does “yoga” mean to you?

What does “burn” mean to you?

So, when you combine two words that seemingly mean two completely different things, what would you assume a “yoga burn” is?

No, it’s not the injury you got from falling out of your tree pose and skidding off your yoga mat.

How about that time when you said your back hurt, someone made a joke about your chakra alignment and everybody laughed? Nope, it’s not that either.

“Yoga Burn” is the 12-week program designed by Zoe Bray-Cotton to help tone and slim down women’s waists.

Let’s get straight to the break down of what “Yoga Burn” is and why those two different words have found themselves stuck together on the front of it.

Practically everyone I know (including myself) has taken up some sort of abs or core exercise routine in an attempt to flatten their stomach and reveal the holy grail of the fitness industry – the six-pack.

It seems an entire multi-billion dollar industry has been built, and continues to grow, on the strength that everybody wants to get abs and very few have them.

So, what makes this course different from all the rest? Honestly, there are some differences in the way it is packaged but you will likely not see much new here that you haven’t already come across.

Will it give you abs? No.

The same answer to every fitness program’s top FAQ “Will it work?”

As with anything relating to fitness you have to actually do it yourself and do it consistently. As the saying goes, you can’t learn how to swim by reading about it. You have to get in the water.

Just because the course is called “Yoga Burn” doesn’t mean the water in this instance is on fire, but if you follow it all the way through it will make you sweat.

But that’s why you’re here, right?

Okay, generic (but honest) fitness program rant out of the way here’s what you actually want to know:

This part of the name comes from some of the concepts woven into the structure of the course. For example, in the first of three sections, called “Foundational Flow”, takes from the practice of yoga to make a strong foundation for you to build on.

This involves mind-body connection and breathing exercises that we will go into later.

As you progress through the next 2 phases a lot of movements are based around yoga moves you may recognise if you have been to a yoga class before, but by the end of the program these will represent something more like a HIIT (High Intensity Interval Training) workout.

Which brings us to the later half of the program’s name:

The whole idea and, as it happens, the selling point of “Yoga Burn” is that by the end of the program you will be in a position to perform HIIT workouts that will rev up your metabolism faster than a youngster behind the wheel of a stolen Mercedes.

Zoe Bray-Cotton is potentially a name you may have come across as the face of several products centred around Yoga Burn and a fitness model in her own right.

Being a certified yoga instructor and personal trainer, as well as a female fitness expert, “Yoga Burn” sounds like the perfect combination of her talents.

But, this could just be good marketing. You know about marketing, right?

If I take a break from playing devil’s advocate for a minute, Zoe does tick all the boxes you are looking for in a flat-belly fitness guru.

Her certifications are recognised internationally, she has helped transform the lives of over 1 million women around the globe and “Yoga Burn” is already an international best seller.

Plus, if that doesn’t convince you that she knows a thing or two, just look at a picture of her. She clearly practices what she preaches, and then some. In fact, she leads all the workout videos with you, in person, and can be contacted 1-1 as part of her online Facebook community.

Break it Down, DJ

Now that we know who she is, let’s go into what she provides in “Yoga Burn” in more detail.

Designed to be spread over 12 weeks, you get 3 separate phases of workouts called “Foundational Flow”, “Transitional Flow” and “Mastery Flow”.

Here, setting the foundation for your exercise routine is the name of the game. For these 4 weeks the yoga poses are simple but crucial for continuing safely to the more intense phases later on.

A big emphasis comes on your breathing and connecting your mind and body. This may be familiar and seem slow to some people but if you are complete novice with yoga it is critical learning.

The breathing techniques used here uses what is known as the “three parts breath” that relates to the abdomen, diaphragm and chest. Here, Zoe aims to activate some deeper muscles of your core that help to pull the rest of your core into tight alignment.

In this phase you build on what you have already learned by incorporating new poses into sequences. Again, if you are used to yoga this will seem frustratingly simple but if you are new to the practice then you will be welcomed to the usual yoga benefits of improved mood and reduced stress.

Potentially a misleading name for the phase as it is more intense, this is where you get your burn on by constantly moving between the poses you already know and new advanced ones designed to help kick your metabolism in and start burning fat.

I call it the drop because if you didn’t know this information until you bought the program and looked inside, I think that you may feel short-changed. And no one likes that feeling.

What I mean by this is that, rather than being the short, sharp workouts that Zoe touts in her promotional videos, what it actually comes down to is a 15 minute work out that you repeat 3 times to create one overall 45 minute workout.

Now, there isn’t a problem with this and most gym-goers will immediately agree that it just equates to doing multiple sets of the same exercise and I also agree, I just thought it was worth mentioning!

Bring the Beat In

If you’re looking for a core like Beyoncé, then in actual fact Zoe could be on to something with the repetition of the smaller workouts.

Her whole system is built around the science of Dynamic Sequencing. Fancy, I know.

In layman’s terms this means continually pushing the body to improve by making workouts harder and forcing your body to adapt. This, combined with the dynamic nature of the workouts never sitting still, helps to push past your potential plateaus and kick into full fat-burning gear.

Aside from this, there have been many comments from users about how this smaller workout repeated over and over is a much more preferable structure.

If they weren’t feeling it or had less than 45 minutes to fit a workout in, they were more inclined to just repeat the video twice instead of thrice for a 30 minutes workout. Alternatively, if they were really feeling it they could even add more sets in, adding more repeats and extending the workout.

The key thing here is that they were incentivised to keep to the schedule of the workout and, as we are all told over and over again, when it comes to fitness, consistency is key.

To get a better idea of what you are signing up for here is what a typical week with “Yoga Burn” may look like:

Indeed. When you purchase “Yoga Burn” you also get additional bonus materials to help keep you up to speed or boost your workout however you choose:

This is some of the relaxing yoga you may have done before. A 15-minute workout that is designed to be restorative and stretch your body into a naturally relaxed state.

A similar video to the first bonus that is potentially slower in nature. However, this is likely the intention if it is to be done on a Sunday.

Arguably the most important part of the whole program, here is where you get a step-by-step guide to the 21 separate poses and how to improve your form.

For some who were new to yoga when they started this program, this has been essential as they complained that there was very little guidance in the videos about the actual poses themselves.

In Favour of Yoga Burn!

Simply put, this program is easy to follow, well laid out and challenging enough to make a physical change after following it through.

A very nice touch is that when you buy “Yoga Burn” you become part of Zoe’s online Facebook community that gives you access to others following the same path, which can be both encouraging and motivating.

Supposedly you also have access to Zoe herself through here but, like many of these claims, you will be able to find those who thought they spoke to her personally and received great advice, and those who tried to get a response from her and came up against a brick wall.

If you quickly read through reviews on some sites it is easy to see that people’s experience with “Yoga Burn” can be wildly different.

Some say the course is far too easy, not what was advertised and even dangerous with the lack of clear instruction on the form of certain poses.

Others have claimed to have caught Zoe out in lying about some products, which lead to them being banned from the Facebook community, while some attempted to get a refund and were told plainly that they weren’t allowed.

Coming in at $37 with a 60-day full money back guarantee, “Yoga Burn” sounds like a winner and I would be encouraged to agree. For what you receive, it is outstanding value.

Unfortunately, it is hard to get rid of the knowledge that others have had issues dealing with her team when it comes to fulfilling their claims.

To end, there are a few things that should be said.

Firstly, the name, “Yoga Burn” may be misleading and if you are an experienced yogi practitioner you might find the program less challenging than you would like.

Secondly, the course is just as it says on the tin: an exercise course. What I think is missing is any sort of guidance when it comes to nutrition. This could be a sticking point because any increase in physical activity will only get you so far without being backed by a strong nutritional plan as well.

If you are hoping for an exciting new program that will torch fat from your abs while still eating multiple doughnuts a day, you will be sorely disappointed.

That being said, the testimony of thousands about Zoe’s course speaks louder than any words you have read thus far and the most common strand that links them all is that they enjoyed the program, they actively engaged with it and stuck to it for longer than any other program they have before.

And for that reason of consistency, I would whole-heartedly recommend “Yoga Burn”.

What would you say is your biggest asset? Your professional skills? How about your biggest physical asset? Maybe your house?...

So, what exactly do we mean when we say “Unlock Your Hip Flexors”? For some, it would allude to the...

When was the last time you had a good stretch? No, not the kind we do every morning in an...